What makes a super chef kitchen? Well, here’s a catch to begin with right away. If you want to have the kitchen or a super-chef, then you have to make sure that you’re going to use as one. In other words, you need to have it in you, so much more than simple kitchen enthusiasm to succeed. Otherwise, you’re going to spend a lot of money and time for a chef-like kitchen, which isn’t going to look or feel like you. So, is there a way to get your own super-chef-kitchen, even if you aren’t an eccentric millionaire with an extraordinary passion for cooking? 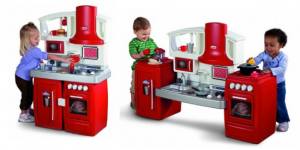 Forget the Kitchens You Saw in The Movies!

Here’s a priceless tip to begin with. You would be surprised how “ordinary” the kitchens owned and run by some of the most distinguishable super chefs look. There’s nothing special about those so-called super chef kitchens you couldn’t find in your own kitchen. So, what are the differences because we’re pretty much convinced there are quite a few of them standing between your current and ideal super chef kitchen? First of all, the kitchen of a super chef is a place where many people like to cook, dine, and socialize quite often. This type of kitchen isn’t used just to show off to your friends and family. Therefore, you need to make sure that you can move smoothly through your super-chef-kitchen and what’s even more importantly that this particular space can answer all of your cooking demands on a daily basis for a considerably long period of time. Super-chef-kitchens aren’t built for the showrooms, but rather for the real people, who like to spend time there a lot.

The Key to a Super Chef Kitchen is the Functionality

When building his or her dream kitchen, any chef will tell you that aesthetic moments are the least of his/her concerns. All that truly matters is to take the least number of steps possible while preparing meals quite often. This means that you should organize your chef-kitchen in the way, which isn’t particularly attractive, but it certainly does the job. At the same time, you have to think out of the kitchen-box of an average user. Forget about triangles you planned to draw between your refrigerator, sink, and a cooktop. This kind of kitchen “secrets” and know-how don’t work for chefs. You need to turn your cutting board in the very centre of both your kitchen and your entire home. In no more than a step or two, you should be able to reach a refrigerator, sink, or cooktop while you’re standing next to your cutting board. This may sound like a simple straightforward rule to comply with, but the truth is that many people easily give up as soon as they see how their kitchen transform itself in quite unattractive ways. Finally, you don’t have to be a super chef to have a super chef kitchen, but you certainly have to use it as one.